It could be argued that the Mothers’ Union prefigured Gafcon’s concerns and commitments! At its inception in the 1870’s in England, the Mothers’ Union was an empowering organization—envisioning for women the calling on their lives to shape the culture for Christ’s glory through their work as wives, mothers and grandmothers.

As Mothers’ Union leaders from different provinces met at Gafcon 2018, we were a picture of the larger work of Gafcon, holding firm on their commitment to Christ Jesus and the importance of discipling women as his followers. In a world that has de-valued marriage, mothering, and the gift of children, we are committed to educating women to follow Jesus and join him in changing their communities, cultures, and provinces through living into their calling of caring for families and children.

Methodologies for how Mothers’ Union carries out its ministry are being discussed and re-envisioned by a group of dynamic and thoughtful women, but the goals remain the same and just as counter-cultural in today’s world. Women who are growing in godliness and wisdom are health and strength for every society. Mothering is a high calling. Children are a gift and a stewardship.

For those in our world who worship at the altar of self-fulfilment and happiness these commitments are out of step and a hindrance to the life they hope to have. But once again, just as it was 150 years ago, Mothers’ Union of Gafcon is committed to the life changing message of Jesus Christ lived out in family and community life.

During the Jerusalem 2018 conference MU Provincial leaders reaffirmed the core commitments and objectives of MU Gafcon as follows:

In accord with these comments The Women's Ministry Gafcon network makes the following recommendations:

Mama Gloria and Archbishop Ben Kwashi (Gafcon's General Secretary) run a care centre for nearly 500 children who have been displaced because of the terrorist attacks in northern Nigeria. Watch this video to find out more about how they are sharing Jesus' love with hundreds of children, and how their lives are transformed through Gloria and Ben's ministry: 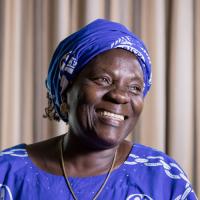 Dr (Mrs) Gloria Ladi Kwashi is the wife of the present Bishop of Jos, Benjamin Argak Kwashi. They married in 1983 and served in both rural and urban churches before moving to Jos in 1992 when her husband became the third Bishop of the Diocese, subsequently serving for ten years as the Archbishop of the Ecclesiastical Province of Jos. Gloria and her husband have six adult children.

The family are not strangers to persecution: as a young couple, their vicarage and church was burnt down in 1987; in Jos they suffered horrendous attacks from hired assassins, but to the glory of God their ministry has not been shaken and has gone from strength to strength.

Gloria has a passion for working with women and children. As a young pastor’s wife, she began the Girls’ Guild, which has now spread over many dioceses. For over 25 years she has been Diocesan President of the Mothers’ Union, Women’s Guild and Girls’ Guild, and is also the Provincial Trainer for the Mothers’ Union. She is an experienced teacher and has led many retreats, particularly for pastors’ and for bishops’ wives.

She has a deep concern for orphans and vulnerable children and she and her husband now have fifty such children living with them. She also began the Zambiri Outreach and Child Care Centre, with a school which has now grown into a primary and secondary school with over 400 pupils – all of whom receive free education, free feeding, uniform, and medical care.  Her life story can be read in ‘Gloria! The Archbishops Wife’ by Abidemi Sanusi (Hippo Books).